The memorial service for Deputy First Class Jason Bush will be held on May 10, 2019 at 11:00 a.m. at the Bay District Volunteer Fire Department located at 46900 S. Shangri La Drive in Lexington Park.   The memorial service is open to the public, and there will be a press area outside the fire department. Members of the press will be permitted inside the fire department to pay their respects however no pictures or videos will be allowed inside the memorial. 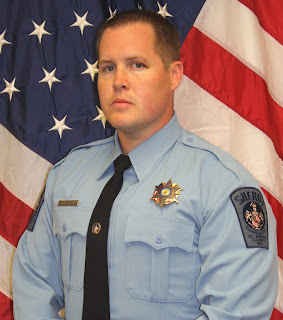 It is with overwhelming grief and sadness that the St. Mary’s County Sheriff’s Office announces the loss of Deputy First Class Jason Bush.

Deputy Bush passed away on Monday, April 29, 2019, after a courageous and hard-fought battle against cancer. He was just 34 years old.

Jason was a native of Prince George’s County and a graduate of York College of Pennsylvania with a Bachelor’s Degree in Criminal Justice.  After graduation, Jason went to work with Prince George’s County government as a civilian investigator, investigating workplace harassment claims.  Jason had built a solid reputation in his career but always wanted to be a police officer.
Jason was hired by the St. Mary’s County Sheriff’s Office on Aug. 10, 2015 and then attended the Southern Maryland Criminal Justice Academy, Class 42 and graduated on June 3, 2016 distinguishing himself amongst his peers.  Once he graduated from the academy he enthusiastically worked in the Patrol Division, working diligently each day serving the public.  Jason served as a Patrol Officer from his graduation on June 3, 2016 until his death on April 29, 2019.

Capt. David Yingling, Commander of the St. Mary’s County Sheriff’s Office Patrol Division, said, “When I first met Jason he distinguished himself with his kind spirit and his commitment to others.  He was a peacemaker on the road and patiently treating everyone he contacted with tremendous respect.  Jason’s grace under pressure and dignity were such an inspiration to those he served with.”

On March 9, 2019, Jason was awarded with the Sheriff’s Office Gold Medal of Valor – the agency’s highest award – which was later presented to him at his home by Sheriff Tim Cameron and Capt. Yingling in the presence of Jason’s Patrol Squad.

Despite receiving a formidable cancer diagnosis, Deputy Jason Bush showed exemplary strength in the face of pain, great dignity despite suffering and demonstrated a continued selfless desire to contribute to the Sheriff’s Office mission. Deputy Bush remained positive, devoting time to his family, close friends and his Sheriff’s Office family – especially his squad. Despite being ill while receiving treatment, Deputy Bush asked to work light duty in the quartermasters office, putting the welfare of his colleagues and the agency ahead of his own.

Sheriff Tim Cameron said, “This is a terribly sad time for the men and women of the St. Mary’s County Sheriff’s Office who worked alongside Deputy Bush and called him a colleague and a friend. However, we can all be extraordinarily proud of Jason for the courage that he displayed in fighting his cancer. Jason’s calm courage in the storm of cancer is an inspiration for us all, as is his commitment, bravery and determination.”

Deputy Bush is survived by his parents Richard and Vicki Bush of Ridge and the men and women of the St. Mary’s County Sheriff’s Office.