As Chief of Staff for the St. Mary's County Sheriff's Office, Butler administers the civilian staff of the agency, including the offices of Finance, Human Resources, Police Services, Records and Property.  "I am excited to continue my career in law enforcement with the St. Mary's County Sheriff's Office", Butler said.  "As the newly appointed Chief of Staff, I look forward to supporting the Sheriff and working alongside the many civilian men and women, and those in uniform."

At the Charles County Sheriff's Office, Butler was Commander of the Patrol Division, Commander and Investigator in the Office of Professional Responsibility, Supervisor of the Warrant/Fugitive and Domestic Violence Unit, Supervisor of Pre-employment/Background Investigations, Supervisor in the Patrol Division and served as the Team Leader and member of the Emergency Services Team for 12 years.  Butler was twice the Governor's Awards Recipient in Crime Prevention for exceptional commercial and residential field service, was the Charles County Sheriff's Office Recipient of the first ever "Gold Medal of Valor" during a lifesaving incident involving a fellow officer in 1997, and was also named the Maryland Sheriff's Deputy of the Year in 1997.

Butler, a native of St. Mary’s County, earned an Associate Degree in Criminal Justice from the College of Southern Maryland, is a 2010 graduate of Northwestern's School of Police Staff and Command, and is a 2012 graduate of the FBI National Academy. 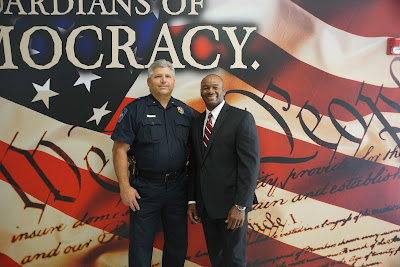