Mechanicsville, Maryland - On May 6, 2015, a victim, who resides at a residence on Finch Court, responded to Sheriff's Office headquarters to report a peace order violation. The victim indicated on 5/4/15, she and two additional victims returned home after being gone for most of the day. The victims poured milk, which had been stored in the home's refrigerator, into glasses to drink during dinner. After one of the victim's swallowed some of the milk, she began to choke on a substance in the milk. She then coughed up the substance and discovered what appeared to be human skin. The second victim swallowed some of the milk and also felt something in the liquid. She immediately began to gag and cough up the milk along with the substance. The third victim poured the milk but never drank it. They subsequently poured the remainder of the milk into a strainer and found what appeared to be human skin shavings in the milk container. The victim's alleged another roommate in the home, identified as Sarah Preston Schrock, age 56, of Mechanicsville, shaves the bottoms of her feet and keeps the skin in trays in her bedroom.


Schrock was issued a peace order on 5/1/15 with the protected parties being one of the victims. On 5/3/15, Schrock was arrested for violating the order, however she returned to the residence that same evening upon her release. She was home alone in the residence for most of the day on 5/4/15.

Schrock was located and placed under arrest. She was transported to the St. Mary's County Detention Center and charged with Felony Contaminating/Poisoning Food/Drink, 3 COUNTS of 2nd Degree Assault, and Violation of Peace Order by Corporal Jaime Davis. CASE #25865-15 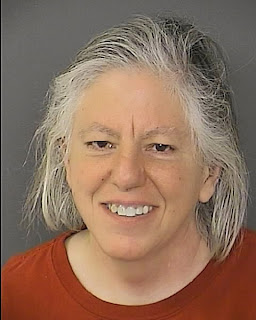