On September 20, 2022, DFC. Wimberly conducted a vehicle stop in the 21900 block of Spring Valley Drive in Lexington Park. The operator of the vehicle was identified as Rondell James Thompson, age 23 of Lexington Park. During the vehicle stop, Thompson proceeded to drive away, and ultimately stopped the vehicle and fled on foot. Thompson was quickly apprehended and located in the vehicle was a loaded handgun with a 50 round drum magazine (high-capacity magazine). Investigation determined the handgun recovered was reported stolen in August of 2021. In the trunk of the vehicle was a bookbag which contained a sufficient quantity of suspected marijuana.

Thompson was arrested and transported to the St. Mary’s County Detention and Rehabilitation Center in Leonardtown and charged with the following:

Possession of Firearm by Prohibited Person

Thompson remains incarcerated at the detention center on a no-bond status. 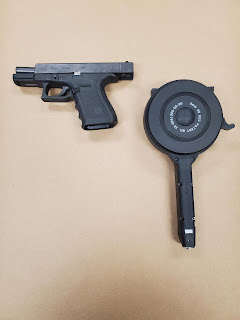 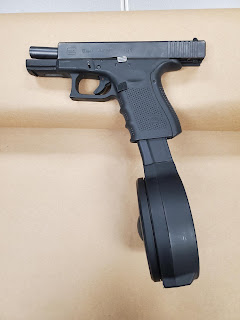